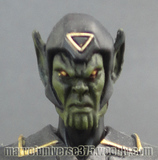 Though the Skrull Empire had vast resources and powerful technology, the backbone of its all-conquering armies was made of these humble soldiers. Each one was trained to use his shape-shifting abilities to create confusion among their enemies, making them vulnerable to the surprise attacks and sabotage that were the Skrull Empire’s signature. For a thousand years, these soldiers were what allowed the empire to bring an entire galaxy to its knees.